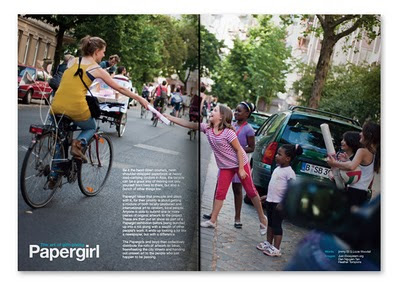 Paper Girl, the inventive art-giving project that launched in Berlin in 2006, has spread like kudzu across the planet with (mostly) girls delivering art free to the masses via their two-wheelers.

The artworks are usually rolled up and delivered by handing them out to people on the street.  Several thousand artworks have been delivered already, and the submissions have been sent in from thousands of artists all over the world.

The concept has spawned a growing interest in bikes, art, and a rolling Fluxus activity. Videos are posted, exhibitions organized, articles written.  The idea of putting art in the hands of people who would not otherwise see it (or own it) is very appealing, apparently to just about everybody.


Papergirl Berlin explains the concept in this Video.  "The basic idea with the project is to bring art to the public in a different way from normal; to surprise people and bring them into contact with art in their everyday life.

"The initial impulse for this project came with the tightening of a law, in 2005, equating sticking up posters in public places with graffiti-spraying. But the idea of distributing art by bike came more from the search for new ways to bring art straight to society, and have more fun doing so, than out of fear of possible punishment. Papergirl is, in short: participatory, analogue, non-commercial and impulsive."
Posted by MATTHEW ROSE at 12:51 PM

this is another wonderful idea ... thanks for the info