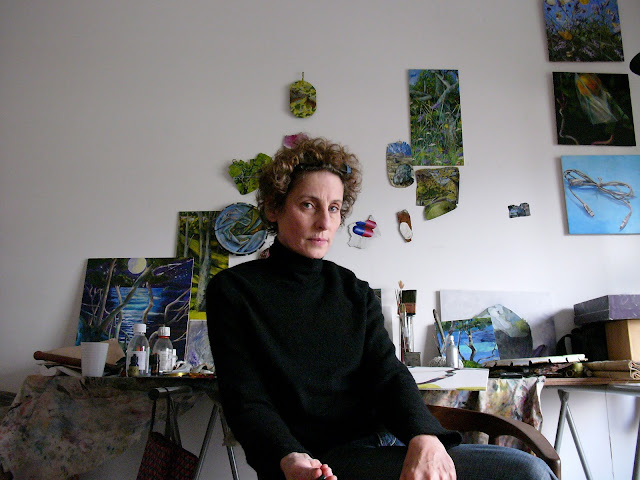 SARAH DE TELIGA AT HOME IN HER PARIS STUDIO.

Painting has never been the simple application of color on surface in order to reproduce reality – objective or not. Any successful painter has rendered reality in a way that endures beyond its own time. And in that process lies the poetic struggle of vision and the talent to pull it off, the result of which is a signature, the hard fought engraved reason for living an aesthetic life in a world overrun with quite a few ugly things.

The expatriate Australian living in Paris expresses that goal that in pretty much every stroke of paint on her varied surfaces. As she prepares for an exhibition at Damien Minton Gallery in Sydney, finishing up some 20 small landscapes on board, 25 paintings on found crushed cans, and six small "pill" pieces on scraps of metal, I had the opportunity to meet with her and talk about what painting is, can be and the effort to get beyond reality to arrive at a nearer truth – in paint.

Store Front Windows: As your show At Home in at Damien Minton Gallery Australia readies to open and you prepare for the trip, what sorts of aesthetic thinking will you be bringing from Paris with you? 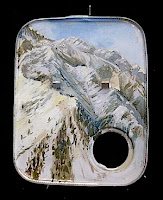 Sarah de Teliga: These past few years I saw and drank in an enormous amount of painting particularly Holbein, Memling, David Hockney, and Gauguin – and Gaugin through Peter Doig’s eyes. Gaugin, with the fabulous exhibition at the Tate in London, is an interesting point of departure. He was always trying to create a perfect world in his paintings – trying to remake even 19th and early 20th century Tahiti. When Gaugin arrived there he saw that it was so impure, so Westernized…he immediately set about creating an island dream.  Earlier he went to Brittany and sought out ancient folkloric imagery that no longer existed and tried to recast it through landscapes, nostalgia and paint.

SFW: And what is that for you…as a painter working at the onset of the 21st century?

SdT: I accept the ongoing contamination of culture… But my beautiful trees in a forest come with a fence and a rubbish bin. I see the constraints of nature, and part of what I do is show we no longer have a pure natural state, but only an aesthetic state.  I've always included those elements of modernity into the landscape; in nature – when we immerse ourselves – I think we are sidestepping the venal aspects of the world.  I'm in a cage trying to create a world with massive landscapes in it. I know it's a fiction, but a desire nonetheless. 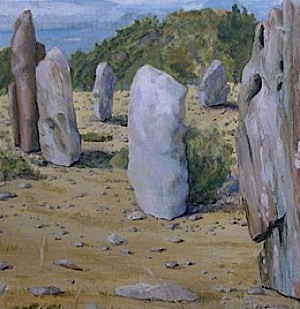 SFW: In your show at Damien Minton, we see landscapes and seascapes from France and England, mountains and seasides. Where's "At Home" for you?

SdT: Home is somewhere I put my mind, where I can paint until the temporal details fade and delicate poetry emerge and where I can focus, meditate, worship. I wonder, is it a form of animism? It can be rock pools in Sydney, megaliths (standing stones) in Cumbria, England, or along the Mediterranean coast in France. All of those outdoor spaces – the sea, the mountains, the forests – connect with me as a child, from my early life in Australia.

For instance, when the first painters came to Australia, they continued to paint that country side as if it were a European landscape. In a way, I'm always looking for the eucalyptus!  In the process, I find that I can swim out as far as I like and won't be taken by a shark. But there's always a shark lurking. Key the music for "Jaws!"

SFW: In this exhibition you've put together an incredible series of works on flattened, rusted cans and tins… There are "chops" and "landscapes" and "megaliths" and "madonnas" and "animals." They are so unusual and strange. What is the genesis of this series? 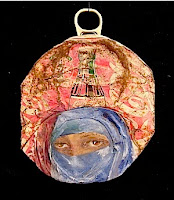 SdT: The crushed can series perhaps grow from my interest in  artists such as  Rauschenberg, using the found, used. An object with a long but contemporary history imprinted in them – their sophisticated engineering, their printing, the finest our culture produces then promptly discards. That they are found and abused reflects back on the culture we live in… "throw away." My pleasure is to place something timeless on them – a landscape or a woman in a burqa or an animal that is so far from the idea of garbage. I have to admit, I love the surfaces and the scale and the limitations; you can only do so much on these pieces. They have to be clear.  Using that surface, I allow the subject matter to generate new and different meanings. The iron age megaliths like Io Pan, which shows a number of wind generators behind the large  standing rock, is like a message in a bottle… but rather a can. I found this on my street run over a thousand times by trucks and buses and cars. There's also a link back to painters who worked on cigar boxes, that impoverished supports, a kind of arte povera of my own. 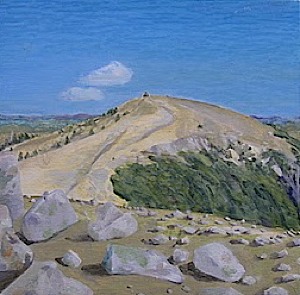 SFW: The pieces with the women in burqas are unusual, and my guess, political…

SdT: The paintings of women in burqas are both on Coke cans.  Given the animosity between the two prevailing Western and Middle Eastern cultures, it seemed that the corporate giant – Coca-Cola – is a logical support for this kind of work.  I understand there is even a competing cola brand out of the Middle East – Mecca Cola.  But I don't think they make cans… if they did, perhaps I'd paint an American serviceman or  make a reference to the poverty-stricken sharecroppers in 1930s on one. That would be fair, don't you think? But it's not judging so much as posing questions.

SFW: And the chops?

SdT: Meat is such a rich and delicious subject.  In Australian culture the barbecue and the chop is kind of an icon, a sign of abundance, fun.  My husband bought a pair of chops for me to work with here in Paris as models, then we ate the still life!  All one has to do is look back at 500 years of still life painting - Rembrandt, Chardin, Soutine, Francis Bacon – and we find a compelling narrative of our own history.  Painting raw meat is a great sensual pleasure. 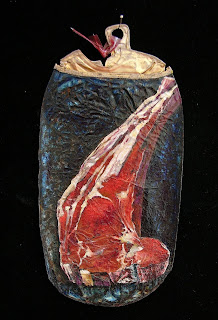 SFW: Your landscapes on boards are so different from these pieces on twisted and crushed metal, how do they relate?

SdT: The landscapes are always plein air, they are real places that alter as I work, as thoughts drip into the landscape unbidden.  Technically, they are more demanding  I find myself reaching towards a brand of realism, but not so much that they are closed spaces. I think people project themselves into these spaces – even though they are quite small – whether it's a seaside or mountain range or forest.  For example, one of the Mediterranean series with its rock formations had one psychiatrist friend of mine telling me she saw legs and arms, a "muscular sensuality" in them. They are windows onto the “marvelous.”  In making them I hope for a certain percentage of the actual landscape filtering back into the work without my control,  becoming a distillation of my own aspirations and psychological moods and nourishing beauty of the natural world. The image has an ability to hold memory in layers, like a piece of amber; my thoughts are something like insects embedded within. The landscapes become symbolic echoes of the spiritual world, feeble little attempts using the certainty of paint to illuminate the spirit. Adjusting the temperature of the natural world to nuances of my feelings.

SFW: Have you always made landscapes?

SdT: Yes, for decades. The first few years after art school I produced interior landscapes, but always with a window. I painted chairs, radiators, and objects we often look at but ignore – cables, electrical outlets, the backs of televisions. Slowly I looked more and more out the window. When I lived opposite the Cimetière du Montparnasse I produced landscapes looking out the window. Then, over the past few years I just walked into these spaces and painted everything around me. There is a spiritual aspect to them, but the smallness of these pieces also makes them objects, totems, ex-votos. They are worldly links to dreams, to love and belief.

SFW: You have an obsession with detail.  I'm looking at some of the newer can pieces, the still-lifes, they seem to be details of draperies, a nod to Cézanne?

SdT: Well in fact there are a few pieces that salute Cézanne, like the paint can top of draperies.  Here in France for some reason my attention is drawn to the folds of fabric, the chips in walls, the miniature parks between the pavement cracks, the patterns in the gutter of cigarette butts outside a school, details in paintings, all sorts of things that we need to overlook.  Adding something of value – a detail of an elegant life – to stuff in the gutter, becomes a time capsule.  I'm doubling up the time capsule with references.  In a way, because I live in Paris, maybe it's how I see the French seeing themselves.  In a fin de siècle dream, they seem to admire a reality that is quite different from the actual– trash in the gutter.  There's a gorgeous irony to that.

I like your work. How about the influence of Bonnard on Gaugin from Brittany days? I think Peter Doig had some things to say about that. Certainly he's a great admirer of Bonnard