RICK PROL: THE WAY BACK MACHINE 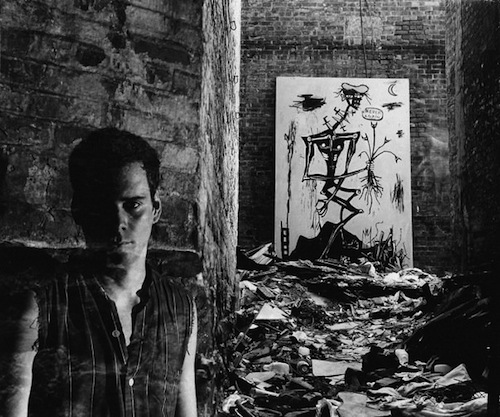 Rick Prol used to show his paintings in heavily littered alleys in the East Village in New York City.  Well before Berlin with its beat up buildings and unvarnished Eastern sector became hip, the rumble and rubble of the Lower East Side was the place that launched a thousand art careers.

In the 1980s, young painters just out of art school or fresh to New York City, were creating the next wave in the practically rent-free storefronts in Alphabet Land near Tompkins Square.  Since then dozens of books have been written about the time when painters returned to the art scene and an illustrated Age of Reagan as seen from street was born. 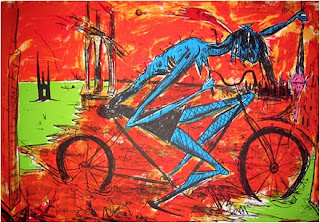 Another work, right, by Prol from his S.O.S. series. Acid green (the East River), broken bridges and dreams, whores on bicycles plunged into the muck. Going nowhere fast. The artist's cats and sailors, knives and nails punched through their bodies and their bicycles, and yes, sometimes their toilets, describes a tough world. But that, too, was New York.

The artist also participated in the 2009 exhibition at The Emily Harvey Foundation Gallery, A Book About Death.  Full disclosure: I wrote a profile of Rick Prol in the February 1986 edition of ARTS magazine.  You can download this as a PDF from Rick's web site (PRESS SECTION).