East Enders State of Mind: Catching Up With Anglo Hysteria 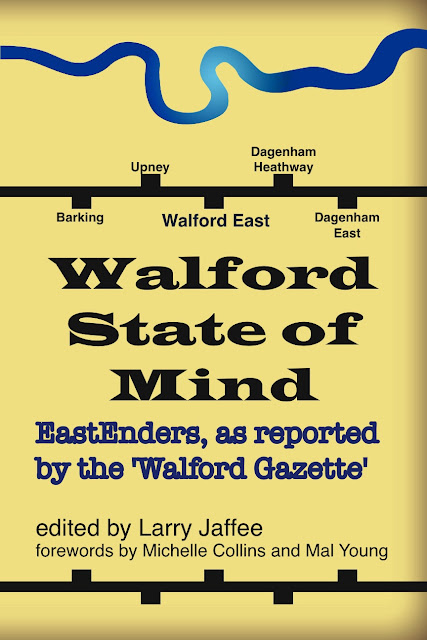 Brits and Americans have had a long-running obsession with the BBC show EastEnders.

Larry Jaffee, author and publisher of The Walford Gazette puts these folks on couch for an analytical session that gets to the root of the matter.

"It's escapism," says Jaffee.  "...but it takes place in a zone where neighbors actually talk to each other.  Yes, there's sex, drugs and everything you might imagine but there's a sophistication about it in the way reality shows are sophistication.  That's the working class in all its glory.  And, it's ours."

Purchase the book, Walford State of Mind on Amazon.  (Also in a Kindle format).

From the publisher's release on the book and its author:

Walford State of Mind: EastEnders As Reported By The Walford Gazette is an irreverent new book that tells the story of the popular BBC series from the perspective of a quarterly fanzine.


The new book (ISBN: 978-0-615-42920-5) features the best of the Walford Gazette’s first 18 years and 72 issues, including contributions from Radio Times’ Andrew Collins (who tells what it's like to be an EastEnders scriptwriter; and renown musician/author Lenny Kaye (Patti Smith Group), who tells how EastEnders saved his marriage, twice!

Walford State of Mind features analysis of the series’ best episodes and characters, and is the follow-up to Albert Square & Me: The Actors of EastEnders, featuring 52 exclusive interviews with current and past cast members (ISBN: 978-0-615-41015-9).

Editor & Publisher Larry Jaffee tells: • how he was banned from the studio for three years for publishing photos in the 'Walford Gazette' under the headline 'ALBERT SQUARE TRESPASSER!" of an American woman who talked her way onto the set;

• how he conversed with Rupert Murdoch on why News Corp. should acquire the US rights to EastEnders when BBC America cancelled it;

• how he encouraged readers to send teabags to the president of BBC America when he told an Associated Press that “The joke around the office is the lesson from [EastEnders] is `Life is miserable and then you die.'"

“The publisher of the Walford Gazette, Larry Jaffee, is the best friend on this side of the Atlantic that EastEnders has ever had, a tireless evangelist for the show fighting for its availability on public television and cable despite setback after setback,” wrote Vanity Fair columnist James Wolcott in his blog.

Walford State of Mind is available on Amazon.com, bookstores everywhere through Ingram, and www.wgazette.com