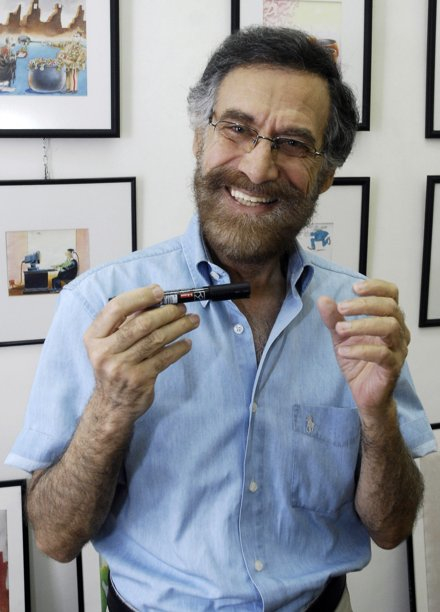 BEIRUT (AP) — A renowned political cartoonist whose drawings expressed Syrians' frustrated hopes for change was grabbed after he left his studio early Thursday and beaten by masked gunmen who broke his hands and dumped him on a road outside Damascus.

He lay badly bruised in a hospital bed Thursday evening with his hands swathed in bandages, a stark reminder that no Syrian remains immune to a brutal crackdown on a five-month anti-government uprising.


Ferzat remembers the gunmen telling him that "this is just a warning," as they beat him, a relative told The Associated Press.

"We will break your hands so that you'll stop drawing," the masked men said, according to the relative, who spoke anonymously for fear of retaliation.

Before inheriting Syria's presidency from his father in 2000, Bashar Assad, a British-trained eye doctor, used to visit Ferzat's exhibitions and offer encouraging words, the artist has said.
When the new president opened Syria to reforms, Ferzat was allowed to publish the country's first private newspaper in decades, a satirical weekly called The Lamplighter.


The paper was an instant hit, with copies of each issue selling out a few hours after hitting the stands. It was soon shut down, however, as Assad began cracking down on dissent and jailing critics after the brief, heady period known as the Damascus Spring quickly lost steam.

Ferzat became a vehement critic of the regime, particularly after the military launched a brutal crackdown on the country's protest movement.

Human rights groups said Assad's forces have killed more than 2,000 people since the uprising against his autocratic rule erupted in mid-March, touched off by the wave of revolutions sweeping the Arab world.

An endearing figure with a bushy gray beard, Ferzat drew cartoons about the uprising and posted the illustrations on his private website, providing comic relief to many Syrians who were unable to follow his work in local newspapers because of a ban on his drawings.

His illustrations grew bolder in recent months, with some of his cartoons directly criticizing Assad, even through caricatures of the president are forbidden in Syria.

This week, he published a cartoon showing Assad with a packed suitcase, frantically hitching a ride with a fleeing Gadhafi. Another drawing showed dictators walking a long red carpet that leads them, in the end, to a dustbin.

The response was swift.


Ferzat, who usually works late into the night, left his studio at 4 a.m. Thursday, but a jeep with tinted windows quickly cut him off, according to the relative. Four masked gunmen then dragged him out of his car, bundled him into the jeep and drove him to the airport road just outside Damascus, beating him and making threats all the while.

The men then singed the artist's beard, put a bag over his head and dumped him on the side of the road.

The Facebook page of the U.S. Embassy in Damascus described it as a "government-sponsored, targeted, brutal attack."

The Obama administration, which has called for Assad to step down, said the cartoonist's beating was deplorable.


"They broke his hands in the most disgusting and deplorable way to send a message," said U.S. State Department spokeswoman Victoria Nuland. "It's not only Ali Ferzat that we're worried about. The regime has also locked up a number of other prominent dissidents to send a message."

Damascus-based activist and film producer Shadi Abu Fakher went missing on July 23 and has not been heard of since.

Ferzat, however, is the most famous victim of the repression to date. He had been encouraging other Syrian artists to side with the protesters, even publishing on his website a "List of Shame" that included names of those who were on the side of the regime.

"We were a group of reformers in the country, and suddenly, the doors of hell opened on us. It was a huge disappointment," Ferzat told the AP earlier this month in a phone interview.
The timing of the attack strongly suggests Ferzat's attackers knew his unusual working hours and had been tracking him. Ferzat said his day starts at 5 p.m.

In the telephone interview, he said he was full of hope that the Syrian revolution would bring about the change fervently desired by so many Syrians.

"There are two things in this life that cannot be crushed — the will of God and the will of the people," he said.

Asked if he fears arrest because of his drawings, he said: "I have killed the policeman in my head."
After news of Ferzat's attack broke Thursday, online social networking sites exploded with angry postings.

"Assad's Syria is the burial ground of talent," read a posting on Twitter.
"Ali Ferzat, your innovation will stand in the face of their cowardice and hate," wrote Suheir Atassi, a prominent Syrian pro-democracy activist.

Soon after the attack, his website where he published his cartoons and satirical commentary was taken down. "This account has been suspended," reads a message on the website, http://www.ali-ferzat.com/.
___
Associated Press writer Matthew Lee contributed to this report from Washington.
___
Zeina Karam can be reached on http://twitter.com/zkaram
Posted by MATTHEW ROSE at 10:42 PM